The British Cleaning Council (BCC), which represents over 20 national trade and membership associations linked to the UK’s cleaning, hygiene and waste management sectors, has officially welcomed several new Council member representatives to new roles across both its main board and its Finance and Policy committee. 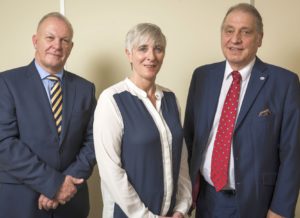 At a recent BCC meeting, hosted by BCC member Keep Britain Tidy at their head office in Wigan, the BCC’s Chair Stan Atkins formally introduced Anne Godfrey, CEO of the Chartered Institute of Environmental Health (CIEH), and Jim Melvin, from the Cleaning and Support Services Association (CSSA), as new Council representatives for their respective organisations.

Jim has had many senior management roles within the cleaning services sector including Operations Director at Pall Mall, Divisional Managing Director at Broadreach Services, and MD at Strand Cleaning in London. In 2013 he joined The Exclusive Services Group as Managing Director.

Allison joined Keep Britain Tidy as Chief Executive in 2015. Previously she was CE of the charity World Child Cancer.

The BCC meeting in Wigan also saw Simon Forrester, Chief Executive of the British Pest Control Association (BPCA) announce that after over seven years in post he was leaving his role at the BPCA in January, and would therefore also be standing down from BCC duties.

Simon’s successor at the BPCA is due to be announced in the New Year.

Commenting on the new roles and responsibilities of the three Council member representatives, BCC Chair Stan Atkins said: “It is great to welcome such high calibre individuals to new roles within the BCC. Their respective experience will help to give the Council fresh insights into challenges and opportunities affecting the cleaning, waste management and environmental sectors, plus collectively they bring skills gained across a diverse range of organisations and industries which will be invaluable as we move forward.”

Stan further added: “It was also sad to see Simon announce his departure from Council as he, and the BPCA, have been very supportive of the BCC’s work since they joined us two years ago. I am therefore looking forward to meeting Simon’s successor when they are appointed.”