The WCEC welcomes a new Clerk

The Worshipful Company of Environmental Cleaners (WCEC) is pleased to announce that Mike Jenkins has joined the Court as its new Clerk. He succeeds Philip Morrish, a long standing WCEC member of nearly over 20 years, who also served as past Master. 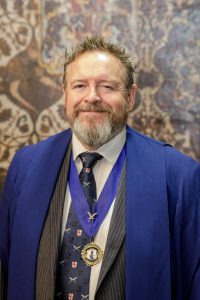 Mike is the first serving Clerk in many years who has not been an ongoing member of the WCEC. Although, he is no stranger to the role of livery Clerk, as he previously held the role at the Worshipful Company of Information Technologists for almost nine years before joining the WCEC.

Born and bred in South Wales, Mike joined the Army and served in Northern Ireland and Bosnia before retiring in 2001.  He has been the CEO of two charities: St Bride Foundation, which is an arts and heritage charity in the City of London, and Cam Sight, a charity supporting low vision and blindness in Cambridgeshire.

WCEC Master, Gary Fage says: ‘Mike brings a broad range of experience and knowledge from the City and charity world.  We look forward to him embracing his role, becoming a valued part of the membership and supporting the Court.’

If you would like to find out more about the Environmental Cleaners, or any of our initiatives or events, please email clerk@wc-ec.com, or visit www.wc-ec.com