The Best Of UK Cleaning Shines At Golden Service Awards 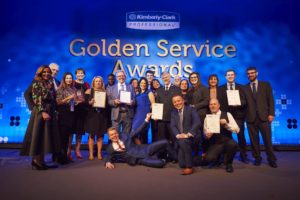 Awards were presented to winners across 14 categories at a formal ceremony on 8 March at the London Hilton on Park Lane, hosted by British comedy star Sally Phillips.

Stephen Jones, General Manager (UK and Ireland), Kimberly-Clark Professional* said: “All winners should be acknowledged as the very best in our industry. This reflects our overall objectives for the awards and our vision to create exceptional workplaces through raising industry standards. We are very grateful to all our sponsors and contributors, especially Diversey, who once again supported the awards as Gold Sponsor.”

Kimberly-Clark Professional* partnered with The British Institute of Cleaning Science (BICSc) who oversaw the independent judging.

“Whilst we congratulate our winners, all finalists must be applauded for the highest standard of entries to date. In some categories judging was very close, and so for the first time we have also presented some well-deserved highly commended awards. What stood out to the judges this year is that those companies who are helping to raise standards in the industry are those that are most committed to investment and training.”

Over 500 professionals from small, medium and large contract cleaning and facilities management companies, plus in-house cleaning teams, as well as local authorities and hospitals, attended the showcase event this year.

For details of all the award winners visit www.goldenserviceawards.co.uk/2018-winners