BCC member the Cleaning & Hygiene Suppliers Association (CHSA) recently raised £14,000 to donate to the Chairman’s charity, the Royal National Institute of Blind People (RNIB), thanks to the generosity of CHSA members. 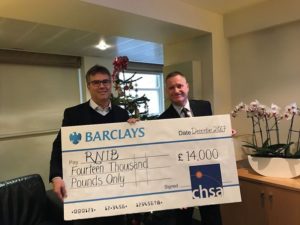 RNIB offers practical and emotional support to people who are losing their sight or are blind or partially sighted, helping them and their families face the future with confidence.  The money raised by the CHSA will be used for the production of unabridged audiobooks to add to the charity’s Talking Books library.

“We’re very grateful for the support of the CHSA,” said Harry Meade, RNIB Corporate Partnerships Manager.  “We estimate there are more than two million people in the UK today with serious sight problems, many of whom don’t get the support they need.  In particular, sight loss can lead to isolation.  Our Talking Books, which are available free of charge to blind and partially sighted people, can be a lifeline.  With this donation we will be able to record five or six more books!”

“We’re delighted to have raised so much for the Royal National Institute of Blind People,” said Stephen Harrison, Chairman of the CHSA and Managing Director of Harrison Wipes.  “RNIB is a charity close to my heart.  I have been inspired by a friend who has sight loss and who cycles with our group on the back of a tandem, and I am now training with him, as his guide runner, to run a half marathon. Inspired by his determination I wanted to do something more for the charity that has given him so much support.  It’s wonderful to make such a significant donation, which is all thanks to the generosity of our members.”

As well as smaller fund-raising activities, the CHSA runs two, incredibly popular highlight events, at which the majority of funds is raised: the Gala Ball and Charity Golf Day.  Taking place in May this year the Gala Ball was held at Heythrop Park, Oxfordshire.  Alongside the sumptuous dinner, the evening was packed with entertainment including a comedian/compere, silhouette artist, close-up magicians, live band and dancing.  Find out more at www.chsa.co.uk