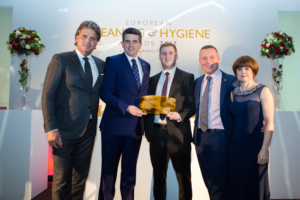 Two of the eleven awards announced at the recent European Cleaning & Hygiene Awards winners hosted in Rome were won by UK entrants, with a firm from Ireland picking up a further pair.

The awards, now in their second year, were held at a gala dinner at the Parco dei Principi Grand Hotel in Rome on 9 November, and were created to recognise standards of excellence in the professional cleaning sector Europe-wide.

The UK’s first winners were the University of Wolverhampton and SmartTask, who triumphed in the Best use of technology by contractors in their cleaning programmes category.

This was swiftly followed by an accolade for Julius Rutherfoord & Co, a London-based contract cleaning company which specialises in the education, office and community sectors in London.

Having been shortlisted for four awards, they claimed top prize in the Commitment to, and investment in, training section.

Marcus Heap, Sales and Marketing Director at Julius Rutherfoord & Co said: “Training is at the heart of everything we do to encourage staff success and ensure we provide exceptional client service. We are honoured therefore to be recognised for our continued commitment to training in these prestigious awards.”

Ireland’s Derrycourt Cleaning also scooped two awards on the night. One was for Excellence in client/contractor partnerships, jointly awarded to them and their client FBD, while a second – Greatest individual contribution to driving up standards of excellence within a cleaning operation – was given to Derrycourt’s General Manager, Avril McCarthy.

Compère for the evening, and member of the judging panel, Michelle Marshall, Editor of the European Cleaning Journal, said:

“The European Cleaning and Hygiene Awards are a unique opportunity to highlight and celebrate the tremendous work being carried out by service providers, manufacturers and distributors across Europe.

“We’re very proud to be involved in these awards which show that the industry is about so much more than ‘just cleaning’. The talent and dedication on show across the wide-ranging categories is testament to that.”

The awards were launched by the European Cleaning Journal in 2016 and are organised by EMG. Diversey Care was the event partner, and Lucart was the silver sponsor for the 2017 awards.